Class of 2006
After completing his Business Law Degree in 2009, James decided he didn’t want to be a Solicitor so he became a Queensland Police Officer.  From 2010 to 2014 he worked in General Duties and Child Protection but it significantly impacted his mental health and he made the decision to resign.  To improve his mental health, he started entering endurance events.  He is now the National Engagement Manager at Beyond Blue in their ‘Police and Emergency Services Program’.  Full Story here. 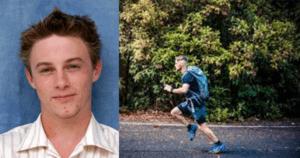 Class of 2003
Upon graduating, Josh auditioned for and was accepted into Australia’s prestigious National Institute of Dramatic Art (NIDA). He has gone on to perform in numerous national and global theatre and movie productions alongside the likes of Cate Blanchett, Hugo Weaving and Rebecca Gibney and has won several awards for his performances.  Full story here.

Class of 2004
Completed a Bachelor of Biomedical Science and went on to pursue a PhD investigating chemical signaling in cancer and the spread of cancer around the body (metastasis). Nikki has also completed a Master of Biostatistics and teaching an undergraduate statistics.  Full story here.

Class of 2004
Completed a Bachelor of Laws at Bond University and Master of Laws at the Australian National University. As a part of her study, she became involved in human rights law with the United Nations and has been working for a US Fortune 500 company as Legal Counsel for the Asia Pacific region.  Full story here.

Class of 2013
Ryan pursued his love of writing and in April 2016 he gained a 3 book publishing deal. His first novel ‘A Hero Rises’, part of ‘The Shadow Series’, was published in September 2016.  Full story here.

Class of 2010
Lincoln moved to the College from Hong Kong in 2008 and graduated with an OP1 in 2010. Upon graduating, he completed a Bachelor of Veterinary Science (BVSc) and was awarded first class honours and the Vice Chancellor Scholarship. Lincoln has practised in both Australia and Hong Kong and is looking to undertake further study to become a specialist surgeon.  Full story here.

Class of 2007
Studied a Bachelor of Education majoring in Drama. Since then she has taught drama, moved to London and studied playwriting at the Royal Court Theatre and returned to Australia and completed postgraduate study in Creative Writing.

From there Claire has gone on to publish three plays and has recently published an award winning novel, Beautiful Mess.  Full story here.

Class of 2006
Caine holds a Bachelor of Music and a Masters in Applied Innovation and Entrepreneurship. He is currently the Senior Music Coordinator at a large school in North Queensland and has recently won the Townsville Startups for Entrepreneurs competition with his development of the online teaching program Tutor in the Cloud.

Please ensure your contact details are up-to-date by completing the form below.